Hubby & I have been talking about getting chickens for over a year.  I’m unhappy with the whole idea of chicken mills – hens trapped in battery cages with no room to spread their legs; hens & roosters raised from hatching to slaughter in filthy warehouses and no sight of sun, no chance to spread their legs or wings and chase bugs and graze.  Not to mention the fact that commercially produced livestock doesn’t receive the best treatment or care… Well, I’m ready to unleash my inner farmer and take a step AWAY from inhumane food industry practices.  Just because something’s going to wind up as dinner doesn’t mean it doesn’t have a right to a happy life.

Which way would YOU be happier? 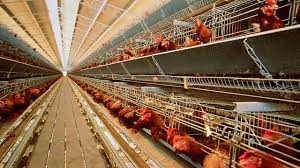 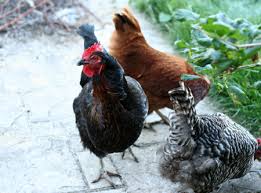 So two weeks ago, when I got my very first paycheck from my shiny new job,  I stopped at Southern States on my way home from work to pick up some cedar shavings for the dog houses – and heard the cheeping from the back of the store and knew it was now or never!  I bought eight chicks – two Rhode Island Reds, two Sex-links, and four Ameraucanas.   I also bought a 100 gallon tub to house them, a water bottle, a feeder, a 25 lb bag of feed, a heat lamp with a bulb, and a bag of cedar shavings.  See, I didn’t forget what I went in there for. 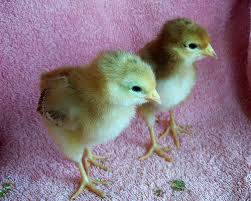 I had hoped to surprise Hubby with my purchases by showing up at home with eight cheeping downy chicks, but I wound up having to call him and tell him before I ever left the feed store.  I was driving his car that day and a 100 gallon tub just isn’t going to fit into a 1995 Geo Metro hatchback, no matter how you try.  He took the news far more calmly than I’d expected, though he wasn’t happy with the idea of driving all the way to Summerfield.  I bargained with him and agreed that we could meet in Stokesdale instead.  We swapped cars.  He took the chicks home and I went back for the tub.

I single-handedly wrestled the tub into the house – but Damon had to help me lift it over the furniture & shelves to get it into the master bath, where it very neatly filled my garden tub.  Last week Hubby built a chicken-wire and wood lid for it so we can leave our bathroom door open now and the cats can’t get a free meal.

Chickens have got to be the dumbest creatures on God’s green earth.  I’ve been feeding them table scraps in addition to their milled feed.  One night they had macaroni & cheese.  There was a whole dish of mac & cheese but they were too busy fighting over one little piece to realize it.  Same with lettuce, spinach, grapes, carrots, whatever.  Of course once they figure it out they don’t waste any time.  What baffles me is when they pick up cedar shavings & drop them in the food & water dishes.  And goodness, the way they panic every time I go in to give them fresh food or water!  I pick them up & they act like the Beast of the Revelation has risen from the sea before them.  I swear, I’ve always heard about how dumb chickens are but I never really believed it until now.  I used to think we should be mildly offended that Jesus called us sheep.  Now I think we should be hugely relieved He didn’t call us chickens. 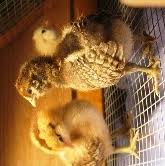 Well, there’s a reason for that.  I’ve done a copious amount of reading over the past few days, and after today I have concluded that I might have bought eight hens, but I brought home seven hens… and a rooster.  Sigh.  Hubby wants to let him “expand our flock” a time or two; I’m more concerned about whether or not I’m capable of killing and eating something I’ve raised.  The good news is, while I have been extremely amused by the antics of these chicks, I’m not even a little bit emotionally invested in them.  Whew!

So I’m now a chicken farmer.  In the next couple of weeks we’ll build a chicken tractor with an attached coop so they can safely free-range… and I guess now that I’ve got a rooster too they’ll eventually be able to truly free-range in relative safety.  I’m led to understand that a rooster will protect his hens from most predators.  I suppose we’ll find out the truth of that.

2 thoughts on “Unleashing my inner farmer”